Bill Maher pointed out the irony of American Right Wing Christianity when he said that if Jesus were a Presidential candidate, the Christian Right would NEVER elect him because he’s a long-haired, sandal-wearing liberal hippie Jew. Uncomfortable with the conflicting tasks of reconciling their Christianity with charges to cut social safety net funding to the barest of bones, the honesty-impaired crew over at Conservapedia have taken it upon themselves to literally begin re-writing the Bible, claiming that previous translations have packed it full of liberal spin. Of course, the Conservapedia answer to this alleged problem is not to create a balanced Bible, but to create a Conservative Bible – hence the name of the project, the Conservative Bible Project.

Daniel Florien, ex-Christian turned atheist, recently posted some of the more liberal, socialist New Testament passages on his blog, Unreasonable Faith. Here are a few of them:

44 And all that believed were together, and had all things in common;
45 And sold their possessions and goods, and parted them to all men, as every man had need.

13 But when you give a feast, invite the poor, the maimed, the lame, the blind, and you will be blessed, because they cannot repay you.
14 You will be repaid at the resurrection of the just.

If you would be perfect, go, sell what you possess and give to the poor, and you will have treasure in heaven.

24 You cannot serve both God and Money.

In addition to these quotes are Jesus’ famous endorsements of forgiveness, compassion and acceptance, rather than grudge-holding, retribution-seeking and judging (e.g., Let he who is without sin cast the first stone; judge not lest ye be judged; turn the other cheek).

When you look at these sorts of quotes, it is perplexing to fathom how Conservative Christians could see themselves in Christ and how they could appreciate let alone revere him. How do they square their widespread antipathy for government assistance programs and homosexuality with these iconic passages? Now, it’s true that the Bible may well be the most cherry-picked, quote-mined text of all time. Given this,

Are there New Testament passages that Conservative Christians can interpret as endorsing their political values?

We’ve all seen Conservative Christians site verses from the Old Testament, perhaps none more so than Leviticus 20:13 (“If a man lies with another man as one lies with a woman, both of them have done what is detestable. They must be put to death; their blood is on their own hands.”). Indeed, the more grim, authoritarian theme of the Old Testament appears – to me, at least – to jive far better with modern day American Conservative values of respect for authority, tradition, corporal punishment, capital punishment, and thoroughly retributive justice. The New Testament, judging by mainstream cultural folklore, sounds to be far more liberal, socialist, egalitarian, compassionate, and forgiving. Am I wrong? I’ll admit that I’ve only read parts of the Old Testament and none of the New, so my question is not rhetorical. What exactly is the Right taking from the New Testament?

What About Jewish Moral Theology?

The Old Testament is often viewed as hellishly harsh and unforgiving. If a country today were to use it as a strict policy guide, said country would rightly be considered to be a stunningly cruel, vicious, totalitarian state. Many Christians today, in my limited experience, seem to downplay the moral significance of the Old Testament, pointing to the New Testament as the relevant Christian moral framework. Accepting this, I can’t help but ask:

Where is the warmer, more humane side of Jewish Theology?

For Christianity, it’s the New Testament. The New Testament gives license to Christians to move past authoritarian barbarism toward less judgmental forgiveness and acceptance. Where does that come in within Judaism? Where is the feel good part of Jewish Moral Theology? It’s got to be in there somewhere. Is it burried within the OT, or in a sister scripture? I don’t for a minute buy that people get their morals from scripture. But there are plenty of people who do. So from this perspective,

Where do observant Jews get their morals?

Just because one does not believe in a God, Gods, karma, reincarnation, astrology, L. Ron Hubbard, or eighteen year old “elders” who knock on your door on Sunday mornings to bring you the good news from Utah, that doesn’t mean that they are not religious. I don’t know that I’ve ever met an atheist who wasn’t religious in their own way. I certainly am. Like other atheists, I subscribe to a sort of religion that is both different and similar to what we conventionally refer to as “religion”. 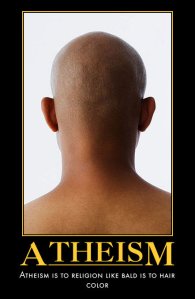 How are atheists religious? END_OF_DOCUMENT_TOKEN_TO_BE_REPLACED

A person truly concerned with helping others have a duty to make sure that their plans actually help them.

Alonzo Fyfe is doing thoughtful writing about issues at the heart of disputes between progressives and conservatives. In this article he argues that minimum wage policies intended to help low wage earners actually hurts them in a number of ways, such as by:

Fyfe’s line of reasoning is not intrinsically liberal or progressive, as the title of this post might have implied. But it’s the kind of reasoning capable of speaking to those who want a society that lends a helping hand to those on the edge of subsistence.

What do  you think?

“I believe in world peace. I believe it is possible.”

– Every politician or beauty pageant contestant ever.

Highly unlikely. That’s not to say that it wouldn’t be desirable. It’s just not going to happen. Even in an idealistic world where everyone had enough food, followed the Golden Rule, did not covet status, wealth or luxury, politicians weren’t corrupt, organized religions did not divide us, and everyone was perfectly honest, rational and considerate of the opinions of everyone else, and moreover, everyone knew that everyone else was being as morally upstanding as they could be, world peace would not happen.

Why not? In short, a lack of resources tomorrow, and irreconcilable disagreements on what is moral and best for society. END_OF_DOCUMENT_TOKEN_TO_BE_REPLACED

When one considers what they, someone else or society should do, they are pondering morality. What is the right thing to do? The good thing? Most of us want to be good people, and at least as many of us want others to be good and governments to be good. This is all great, but as a consequence of our respective biological makeup, upbringing, socioeconomic status, and so on, we have different opinions of what constitutes good. And what is more, we can be very intolerant of differences of opinion – and for good reason.

If your favourite sport is baseball and mine is soccer, you probably won’t really care much at all about the difference of opinion, and neither will I.  But if I begin advocating for the moral neutrality or goodness of rape, you probably won’t be nearly as live-and-let-live as you were when I told you that I preferred soccer to baseball; and neither would I be. Our aesthetic preferences with regard to foods, colours, sports and so on are personal and amoral. But when someone offends our moral senses, it’s big. Whether or not we subscribe to a particular God or religious cannon, we often get the sense that something objectively wrong has been done. Even secular codes on conduct are based on what are viewed as transcendent values.

But we all have to live together. People who support the legality of abortion have to co-mingle with those who find it to be an abomination. People who are against taxing those with more money to help those with less have to live amongst – and have their money taken in the interest of – those who support various types of government-run programs and services. If we’re going to live together, we need to be able to understand each other as well as we can.

In this, the first substantive post on this new blog, a series of posts as well as some of the goals of this blog are introduced. Every two days (my schedule allowing) for the coming days a new post in the series will be published. The posts will be as follows:

Wednesday, October 20: Moral/Political Echo Chambers. A brief look at left and right wing politics in the US.

Sunday: October 24: God, Reason, &/or Morality are on MY side. A look at how people of pretty well all beliefs believe or at least behave as if they had some transcendent moral reality on their side.

I also mentioned that some of the major goals behind this blog are being introduced in this and the coming series of posts. These goals include seeking people of alternative moral/political frameworks to consider issues with, and me doing my part to promote honesty and understanding by pointing out not just misunderstanding and slant on the right, but doing the same to those on the left – even those who I tend to strongly agree with and respect.

Welcome to Death By Trolley. See you on Wednesday 🙂